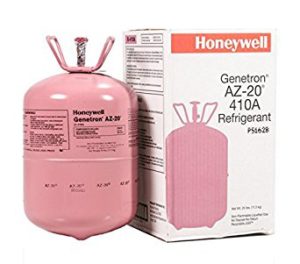 Hydrofluorocarbons, or HFC refrigerants, are the topic of this post, continuing the discussion of refrigerants and climate change. In my last post, I talked about how switching from CFCs to HCFCs, such as HCFC -R22, has reduced the ozone depletion caused by older refrigerants. It is true that HCFCs aren’t as damaging to the ozone layer as CFCs, but they still have an ozone depleting effect and are in the final stage of being phased out.

Enter the 3rd generation refrigerants known as hydrofluorocarbons, or HFCs. They consist of hydrogen, fluorine, and carbon. Notice that, unlike CFCs and HCFCs, HFC refrigerants do not contain chlorine and hence do not destroy the ozone layer. However, like CFCs and HCFCs, HFCs are a greenhouse gas. HFC refrigerants are approximately 1000 times more potent than CO2 as a warming agent. Though currently they comprise only a small percentage of greenhouse gas emissions, they will increase as air conditioning becomes more affordable and common in developing nations. Some estimate that by the end of the century, HCF refrigerants could contribute to as much as 1 degree Celsius of warming. If you have an air conditioner made after 2010, it probably uses HFC-410A as a coolant.

Because of increasing concern about global warming, the Paris Climate Accord, reached in December 2015, was agreed upon by all but two countries. The goal of this “gentleman’s agreement” is to reduce greenhouse gas emissions to 0 by 2050 and hold the increase in global temperature to 1.5 degrees Celsius. The two nations who did not sign were Syria and Nicaragua. Syria was in the middle of a civil war and couldn’t come to the table. Nicaragua protested that the agreement was not tough enough to prevent warming. Indeed, the target greenhouse gas reductions pledged by each nation is not legally binding. President Obama pledged that the United States would reduce greenhouse gas emissions approximately 25 percent by 2025 using multiple means including clean power, reducing HFC refrigerants use and production, increasing energy efficiency of buildings and appliances, etc. In June 2017, President Trump withdrew the United States from the agreement. However, as of July 2017, 350 mayors have formed the Climate Mayors and pledged to continue to follow or increase the Paris guidelines. In fact, many of them have committed to the goal of 100% clean energy. Boulder, for example, is attempting to “divorce” Xcel Energy and create a municipal, clean energy electric utility.

The Kigali Amendment on October 15, 2016 to the Montreal Protocol specifically addresses HFC refrigerants, and stipulates a timeline for limiting production and use. RIch developed countries in the European Union and the US will begin with a 10% reduction (from 2012 baseline) in the use and production of HFCs in 2019 down to by 85% by 2036. Developing countries have a more lenient timeline. Reduction will avoid up to .5 degree Celsius of warming by the end of the century. Note that the US has not ratified the Kigali treaty yet (and it’s fate would be uncertain under the new administration), but indications are that movement will continue in the direction of implementing the phasedown, whether legally required or not.

Refrigerant manufacturers are working hard to develop the next generation of refrigerants to address the warming issues with HFCs. Efforts are largely focused on hydrofluoroolefins, or HFOs. These break down in the atmosphere in just days, so may have a lower global warming potential, but still are typically from 160-600 times more potent than Co2. In addition, HFOs tend to be either more flammable or toxic than HFCs. Another possible refrigerant to look at using happens to be an HFC, HFC-R32, which has a Global Warming Potential of 677 which is much less than that of HFC-410A’s 2088. Propane, ammonia, and carbon dioxide also have potential for some cooling applications. What does this mean for you? Your residential AC system will continue to use 410A for the foreseeable future. If you have an older system that uses R22 and you face a significant repair, you may need to upgrade to a new system. Just as has happened with R22, supplies of 410A will begin to decrease when the phasedown starts in 2019, and price will increase as the phasedown accelerates. Research and development efforts will continue to identify coolants that are more environmentally friendly. The industry may move toward a refrigerant which can be used in existing systems.

Meanwhile, you can do your part to limit greenhouse gas emissions by making sure that your equipment is running at peak efficiency. Ask your HVAC technician to repair any leaks before refilling or topping off. In a closed system such as an air conditioner, the only reason for low refrigerant is a leak. Make sur your HVAC tech has the EPA 608 certification required to handle refrigerants. Consider asking to see their certification card. Make sure your HVAC tech recovers and recycles any old coolant – it is illegal to just “release” it into the environment.

Another aspect of climate change and air conditioning unrelated to the type of refrigerant used is the effect of increasing the efficiency of air conditioners, thus reducing the demand for coal-fired power plants which emit the greenhouse gas CO2. But this is a topic for another post. Meanwhile, please let us know if KJ Thomas Mechanical can help you with any HVAC needs. Contact us or call 303-435-8141.

Thank you for your submission.

There was a problem with your submission.

There was an error with your submission.