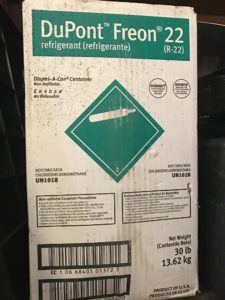 My last blog post mentioned that air conditioning refrigerants, such as CFCs and HCFCs, play a role in climate change. Refrigerants, also known as coolants, have evolved over the last 90 years and will continue to change as part of the drive to lessen their impact on the environment.

Did you ever wonder what type of coolant your air conditioner uses? You can easily find out by checking the nameplate on your outside unit. That nameplate tell you, among other data, the type of refrigerant your unit uses. After reading this and the next post, you will know how “evolved” that coolant is! Recall that in my previous post, I mentioned that the first generation refrigerants, including ammonia, propane, and sulphur dioxide, were toxic and flammable. In this post, you’ll find out about chlorofluorocarbons (CFCs) and hydrochlorofluorocarbons (HCFCs), the safer second generation refrigerants.

Recall that CFCs were invented in 1928 and were widely known by the DuPont trade name Freon. CFC-R12 (Freon-12) was widely used in refrigerators, inhalers, and aerosol spray cans. CFCs were not widely used in air conditioning systems, but are worth talking about here to understand their effect on the environment.

Around 1970, scientists realized that CFCs deplete the “good” ozone in the earth’s upper atmosphere. The layer containing ozone extends 6 to 30 miles above the earth, and protects living things from the sun’s harmful ultraviolet radiation. Exposure to increased UV radiation has caused an increase in skin cancer and cataracts, damaged crops, and affected the foundation of the ocean food chain by damaging phytoplankton. When CFCs, which are made of chlorine, fluorine, and carbon, break down over time due to exposure to UV radiation, they release chlorine atoms which react with the ozone molecule to destroy it. One chlorine atom can destroy 100,000 ozone molecules! CFCs are responsible for the big hole in the ozone layer over Antarctica discovered in 1985.

To make matters worse, CFCs also are a “greenhouse gas”. Greenhouse gases act like an insulating blanket over the earth, trapping heat instead of letting it escape into space. Even when present in very low atmospheric concentrations, they cause a great deal of damage because they have a very long lifetime before breaking down in the atmosphere. For example, CFC-R12 has a lifetime of approximately 100 years, while other CFCs can last from 45 to 1700 years.

One standard for measuring and comparing greenhouse gases is the Global Warming Potential (GWP). It quantifies the amount of heat a gas traps, and how long the effect lasts depending on the lifetime of the gas. Every gas is compared to the greenhouse gas carbon dioxide, which is arbitrarily assigned a GWP = 1. Using the latest assessment data from 2014, CFC R12 has a GWP of 10,200. That is, it is over 10,000 times worse for the climate than carbon dioxide!

To deal with the global problem posed by CFCs, The Montreal Protocol of 1987 was signed by 197 nations to phase out the production of CFCs by 1995. Since then, only CFCs recycled from old equipment has been available.

HCFCs then became the go-to refrigerants as alternatives to banned CFCs. HCFCs contain chlorine, fluorine, and carbon (just like CFC), but also contain a hydrogen atom which decreases their stability and gives them a shorter lifetime in the atmosphere. They mostly break down before they reach the ozone. Like CFCs, HCFCS may be referred as “Freon”.

HCFC-R22 (also known as Freon 22 and R22) has been the standard for use in residential air conditioners starting in the 1960s, when new houses often came with AC, through the mid 1990s with use decreasing through 2010. Although HCFCs are much less damaging to the ozone than CFCs, they are still powerful greenhouse gases (though not as bad as CFCs). For example, R22 has a GWP of 1760, almost 2000 times worse than CO2.

As a result of environmental concerns, the Montreal Protocol was amended to also phase out specifically HCFC-R22 by 2020, and all HCFCs by 2030. Production and import of R22 was banned on January 1, 2010, except to service and maintain existing equipment. R22 air conditioners were banned from production by the EPA as well starting in 2010 (except for an interesting loophole recently closed that allowed manufacturers to produce and ship units “dry” for filling with R22 onsite). Production and import of R22 will be decreased gradually to zero by 2020, at which point equipment can only be serviced with recycled or stockpiled HCFC-R22.

What does this mean for you as a consumer if you have an AC uses HCFC-R22? You can still recharge your equipment (after fixing any leaks!) with R22 as needed to maintain it from recycled or stockpiled supplies. Unfortunately, not a lot of R22 gets recycled. So as supplies decrease, prices will continue to rise. Currently, R22 is at least 5 times more expensive than more modern and preferred coolants, and even that may seem inexpensive in the future. Another option may be to retrofit your R22 unit to use a more environmentally friendly coolant MO99 (also known as HCF-R438a). If you need a major service, it might be time to replace your older equipment with a new system that is more energy efficient and uses a more environmentally friendly and less expensive coolant. We’ll talk about these refrigerants in the next post.

The good news? The hole over Antarctica is starting to heal, and predictions are that it can be completely healed by 2050 if further damage to it can be averted. There are more environmentally friendly refrigerants available today. There are even developing technologies that hold promise to cool without the use of refrigerants! Stay tuned! And as always, call KJ Thomas Mechanical at 303-435-8141 if you need heating and air conditioning installation or service.

Thank you for your submission.

There was a problem with your submission.

There was an error with your submission.